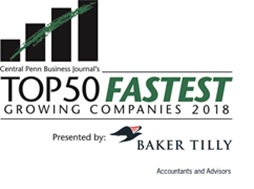 EGStoltzfus is proud to announce that is has been named to the Central Penn Business Journal’s 22nd annual list of the Top 50 Fastest Growing Companies in Central Pennsylvania. The company received the #6 ranking at an awards breakfast on September 17th.

Special thanks to Trout, Ebersole & Groff, LLP for this year’s nomination.

For-profit entities that are headquartered in Adams, Cumberland, Dauphin, Franklin, Lancaster, Lebanon, Perry or York County were eligible for nomination.

The presenting sponsor of the program, Baker Tilly, calculated the nominations and then ranked the companies according to revenue growth over the three-year period. Both dollar and percentage increases were taken into consideration. This ranking formula led to the list of 50 winners.

A ranked list of honorees and profiles of each company will be published in a special supplement to the September 21st issue of the Central Penn Business Journal.

Read our latest update in light of COVID-19 … Continue Reading »